Bonanza star (and star of other shows, as well) Pernell Roberts passed into the hearafter, January 24, 2010.  There are a few reasons I mention him, even though he wasn't involved with the radio industry: he starred as Adam Cartwright on the show Bonanza, which started in 1959 and was the Number 1 show from 1964 to 1967...during some of the greatest years (some consider) of KAAY...and it was a great show to watch growing up!  In ten of its 14 years on the air, it was in the Top Ten, as well.  He also starred in, "Trapper John, M.D." which I didn't watch much, but he played the character as a spin-off from another favorite show of mine, M*A*S*H.

Pernell Roberts cut a folk album, "Come All Ye Fair And Tender Ladies"...which, I doubt any of which aired on KAAY, but still, was a musical endeavor of his.  He also served in the Marines before acting in the 1950's...Ooh-rah!

I wonder how he rode off into the sunset: in a jeep or on a horse?  Nonetheless, good memories.... 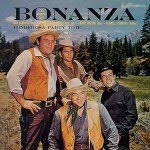