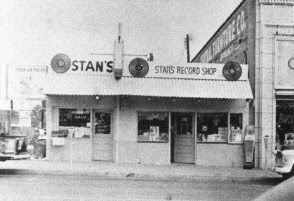 Another vendor that booked advertising with KAAY was Stan's Record Shop at 728 Texas Street in Shreveport, LA.  Due to KAAY's long-reaching signal, there were numerous customers outside Little Rock and the state of Arkansas who advertised with the station; this is one that immediately comes to mind, I'll have to try and research more.

There are several Internet references to Stan's Record Shop and several 50,000-watt stations carried his advertising.  He was the distributor for Chess Records of Chicago, IL, as well, and with KAAY, Little Rock, AR, KWKH, Shreveport, LA and WLAC-AM, Nashville, TN, he blanketed the South and became the largest independent record distributor in the region.  He also advertised on XERF, Del Rio, TX.  Stan Lewis also had an independent record label, but finally sold out while retaining the control of his music publishing companies.

I thought it quite interesting that, as a kid, Stan Lewis sold news papers to buy several jukeboxes and bought the records for them at a record store in Shreveport.  Later, when he found that the record store was for sale, he and his wife bought it in 1948, and Stan's Record Shop began in a little 8' x 12' space.  From humble beginnings came an empire!

Here are a few links you may want to follow...some have slightly differeng stories, but all tell the story:

One last link, with some really nice pictures and story of Stan in the Louisiana Music Hall of Fame:

If anyone remembers buying or mail-ordering from Stan's Record Shop, please give us some coments- I'll bet his service was superb!