Bury My Heart At Wrightsville‏ 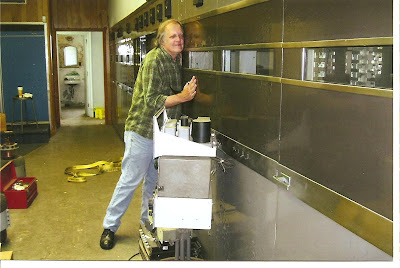 It's hard to look at the KAAY transmitter site now. It hurts like watching your Mama die. "Ruins" is too strong a word, but not by much. If you ever listened to my station, if you ever did love it, if it was your constant teenage confidant, you have to know about the sorry shape that its heart is in. I struggle to convey the decay.

We had seen recent pictures of the site. They were taken from beyond the fence and they revealed traces of the neglect we would find when we were so graciously allowed in. When I saw the tall grass everywhere in the pictures, it didn't have any connection at ALL with the way Felix McDonald kept that property. What his cows didn't graze down was laid low by a high-wheel Yazoo Master Mower at least every other week. The high grass was just the beginning.

Our little convoy--Bud and Jerry Sims (Sonny Martin II) in Jerry's SUV, my son Matt and me leading in my pickup--rolled through the gate just after noon. It had taken four wrong turns to get us there and I wish I had never uttered the phrase "I know exactly where we're going." Time has this humbling way of erasing landmarks.

That two-story brick building from 1952 was meant to stand a hundred years. It was supposed to stay intact enough when the Russians nuked us so that KAAY could remain on the air. And now it's going to be demolished because it's falling apart. There's water damage on the inside and there are trees growing on the roof! I simply cannot get my mind around the way it looks now--because I remember how it was when Felix was Chief Engineer.

The wood panels on the lower-story garage doors are warped and buckled and split from lack of paint. There's junk scattered everywhere on that lower floor. Parts dating to the time of KTHS are laid about haphazardly. Shelves that hold hundreds of reels of tape are falling down--one nearly got me later when I stupidly moved a two-by-four. I saw a literal avalanche of tape cartridge shells covered by cobwebs in one corner. You cannot walk two paces without having to step over something else that looks like it was just tossed aside and left to molder.

We initially did not spend much time downstairs because I wanted the boys to see Big Mama--my pet name for the fabled RCA BTA 50-F transmitter upstairs. There are things in this world that will just not fit into a photograph; you've got to go stand next to them to see how grand they are. Pyramids and canyons and the West of Ireland and 50,000-watt RCA vacuum tube transmitters from Camden, New Jersey, in the early 1950s. Big old things like that, some of which will kill you if you touch 'em wrong.

Paint flakes stirred like a snowstorm as we climbed the stairs. (Paint flakes in the House of Felix! How bad would it have killed you misers to spring for a new coat of paint every five years or so?) The fear of lead in the particles was quickly shoved aside by the gallows grin that the prospect of PCBs in the transformers brought. It was WAY too late to worry about the small stuff.

My soul shriveled when I saw the RCA. There were cracks and jagged shards in the enameled front that Felix had once used Simoniz paste wax upon. I swear, she was WRINKLED! Did you ever see somebody put into a nursing home and just…LEFT? The transmitter didn't look like she'd had the least bit of love since April 3, 1985. (Yes, that would've been the Last Day; we ran her like a racehorse for better than seventeen hours that day and she never broke a sweat. At midnight, Felix literally had to knock her loose from the antenna array.)

I put my hands on her, I snuggled my face up to her. I am just this side of tears to try telling you about the love between me and such a supposedly inanimate object. That transmitter recognized me. She knew who I was. She CARRIED me--and Phil and Clyde and Jerry and Sonny and George and Jonnie and Wayne and everybody else at 1425 West Seventh Street--to a chunk of the Western Hemisphere all the way from Canada to Cuba, and all the way LIVE.

And now they're going to tear her down and junk her. Young Frank The Engineer was pretty casual about telling me they (and I may never speak or write the name of the company again) plan to bulldoze the building and put up a new one. They won't be keeping the RCA because she's too big. That little tidbit has left me numb to where I can't even muster any outrage: it threw me right past anger into despair. Let me see if I've got this. It looks like the company didn't spend a dollar to maintain the building--but now they'll be laying out the megabucks to demolish and rebuild?

A good few of my compatriots are in a cold sweat over what will happen to the thousands of miles of tape, papers and memorabilia in the building. Thank God, there's a group working to get items of historical import into museums and archives. More power to them; everything we couldn't store at 1425 West Seventh or 2400 Cottondale Lane "went to the transmitter," as we termed the process. One or two loads a week were hauled and stacked over the years. (And you can bet that everything was put in its place 'cause Felix didn't take no clutter!) The task of removing and sorting the important stuff is going to be mind-boggling.

Sentimental old fool that I am becoming, the imminent loss of the RCA has me running through the stages of grief like an Ampex 350 on fast forward/rewind. At this point, it looks like she cannot be preserved whole because nobody has the room to take her. Not even the Smithsonian Institution, and they hung a blue whale from the ceiling. Damn the very eyes of whoever has let it come to this!

In a just world, I'd have a barn big enough to hold Big Mama. I'd be rich enough that my power bill wouldn't even be a nuisance. I'd run her into a dummy load on weekends so that the faithful could see her the way I did: lit up and ROARING.

Oh well. Just about enough time left to spin that Jamie Brockett tune that was such a favorite on Beaker Street. You know the one. It's got the chorus that goes:

"It was midnight on the sea,

The band was playing "Nearer, My God, To Thee."

David B. Treadway
Doc Holiday VII
The Last PD
Posted by   at 4:09 AM