Yes, just blame this radio geek for all this stuff!  Jerry Sims has told me time and time again, "You technical guys understand that stuff!"  I hope this is not boring anyone, because THIS is radio history that will one day "go away" and we need to preserve and chronicle as much of this as possible.  Dave M. has comments in an upcoming post that will be interesting about the RCA BTA-50F1 transmitter that some (I) didn't know....

Do you ever wonder about those tubes?  Dave M. mentioned that they sat in ceramic sockets.  These tubes were 325+/- pounds and required a tube trolley to remove and replace them: 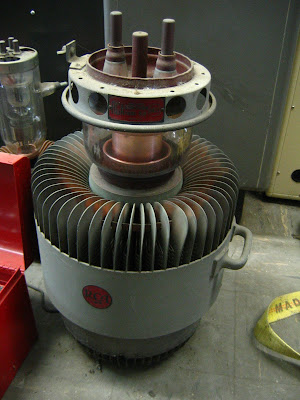 I almost grabbed that handle to see how heavy it was, not knowing I'd never budge it!

"There was a small trolley with a lift fork that we used to lift them off the porcelain "socket".

The "socket" was just a cylindrical porcelain thing that was connected to the forced air chamber (under the tube). The tube just "sat" on the porcelain mount in much the same way you take your morning constitutional. Forced cooling air was from bottom to top through the fins and then out the chimney in the top of the cabinet. 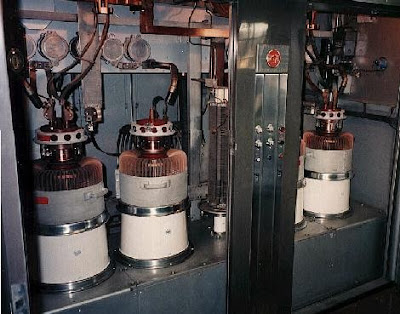 The photo is the RF power amplifier cabinet. Two tubes were active, and the other two were "spares". Notice that on the left side pair, the filament leads are only connected to one of the two tubes on that side. Same for the right half of the cabinet. If you had to change a tube on the fly, you could swing the leads over to the "spare" tube and get back on the air quickly. Then when you had time on maintenance night, you could lift out the dud using the mini forklift, and swap in a fresh tube.

The modulator cabinet had three tubes - two on line and one in-place spare."

Dave sent me a specification sheet, which is too large to print here; suffice it to say, at Class B operation, one tube utilized 15,000 volts with a DC input of 90,000 watts to produce 25,000 dissipation watts...that's watts output potential per tube!

Here is a spec drawing: 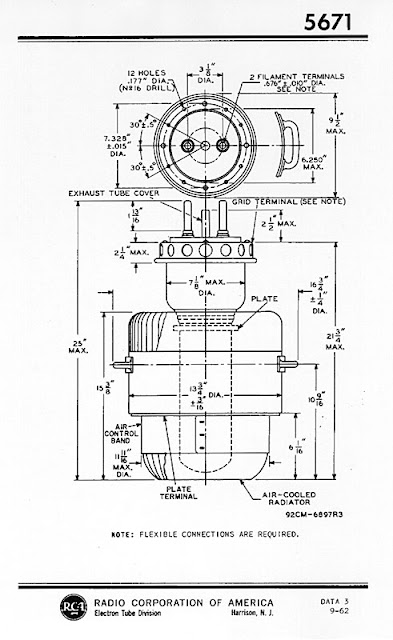 That is one tough tube!  I think Dave also mentioned to me that, what with those cooling fins around the tube and all the air rushing around them, they'd collect a little dust; Felix McDonald would actually pull the tubes and wash them to get the dirt/dust out of them!  I'll have to find that bit o' correspondence....

By the way, Dave also writes, "There is a FANTASTIC writeup and tour of the BTA 50F transmitter at this site. I highly recommend a read - it's a wealth of information!

Here's a snapshot of the tube trolley I mentioned. (WGAR photo)":

You had to have all the tools of the trade to make things work...and KAAY enginners knew their business!  Thanks again, Dave!

Hang in there...we've got so much more!