Such awesome power!  Not only in wattage output, but voltage and current input, as well...these magical machines ate it up and flamed it out!  More comments by Dave M.: 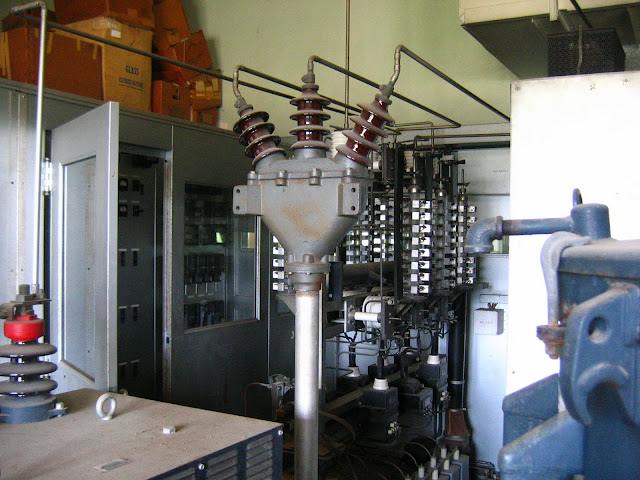 "OK gang, this is a busy photo with several interesting things to point out.

Most prominent in the middle is the "Y" looking thing. This is the main AC input to the rectifier stack.  You'll notice that the "wiring" at this point was all done with copper pipe, just like house plumbing. Except that very high voltages at high current went through these pipes. "Behind" the feed through you can see the rectifier stacks - most of them have been converted to solid state, eliminating the mercury vapor tubes.

In the near field, bottom left you can see the corner of a large steel enclosure. This is the choke for the power supply.

On the right near field, you can see another even larger metal enclosure with a pipe coming out of the top - - this is the modulation transformer weighing in at a nice trim 7,000 pounds. It is pretty much a conventional audio transformer, rated at about 35,000 watts average power handling capability. It sat in a tank of oil - the oil was used for cooling. In all the years working there, and as hard as we pushed the transmitter, I never felt the transformer tank running more than warm to the touch.

In the back of the photo to the left of the power feed through, and directly under the stack of boxes you can see a very small room with a bunch of black looking things. These were the control relays and circuit breakers for various operating sections of the transmitter. You could access these from the front of the transmitter when it was running - it is a "safe" room when the inside door is locked and the interlocks engaged. During normal operation, if a circuit breaker tripped, you would go into this room (from the front) to find out which circuit had tripped, and the CB could be reset from here. Each circuit breaker had a "flag" to indicate its status."

And, so far, that's Dave's tour...I think I sent him more photos for comment and I'm sure he'll have more to add later.  In the meantime, here are several more pictures of the transmitter and feedline areas: 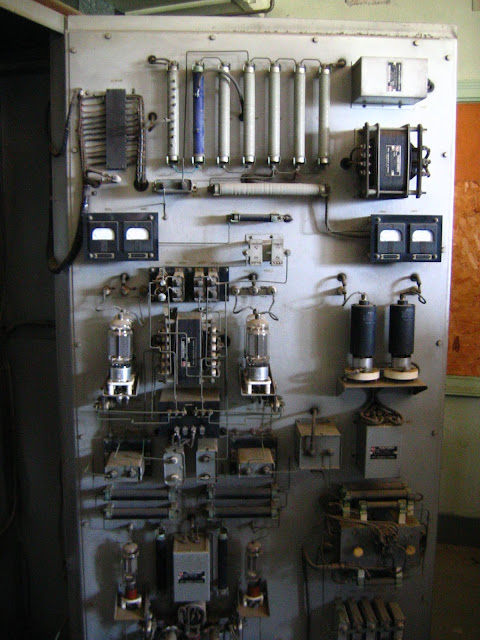 This circuitry was on the backside of one of the doors I opened... 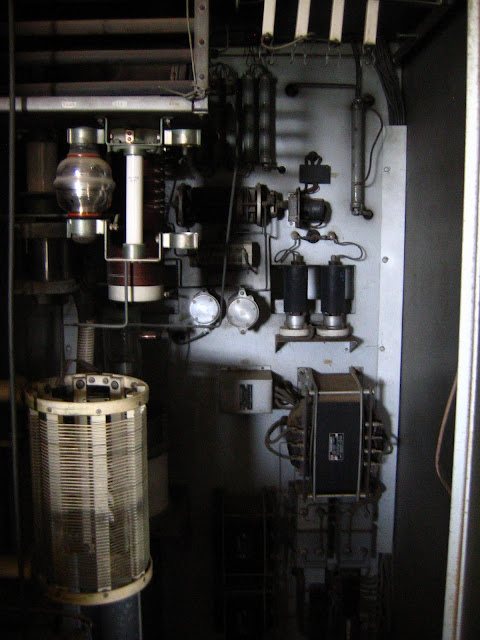 ...and the inside of the same area, I believe. 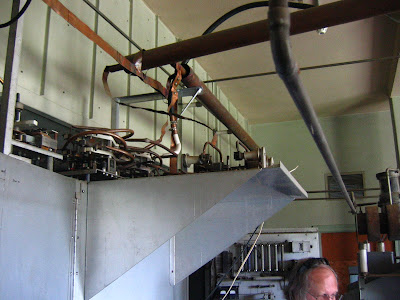 This is a little different angle of the aforementioned relay and feedline Dave commented on...you can see some of the circuitry a little better.  There's David B. Treadway in the lower right-hand corner!

While my radio geek self was poking around in the transmitter David B. and Jerry were poking around all over, looking at stored items...more coming right up!