My Trip To Little Rock: Tuesday, On The "Antenna Farm"

For those of you who are wondering, the term "antenna farm" is what we Ham radio operators call our antenna structures.  It seemed fitting here, since they were out in a field that was home to cattle and pigs at one time, and round hay bales were in the eastern end of the field when we arrived today....hence, the farming aspect!

Nonetheless, we ventured out to see the antennas, the great structures which launched that massive signal halfway around the globe.  Technically, the antenna system is probably the most important piece of the whole system.  I found out years ago that, without a good antenna, the best I could afford or build, power output and signal wouldn't make a difference, no matter how much you transmitted.  An old friend in the business once told me that if he had a $1000.00 budget, he'd spend a hundred of it in the radio and $900 in the antenna and feedline system.  He was right- I've launched an itty-bitty signal all over the place with a super-efficient antenna system.

I said that to say this: Felix McDonald, Dave Montgomery and all the others were serious about the equipment of this station.  There's several tales about the antenna system on this blog, some humerous, some informal- but all factual and serious about performance.  They maintained the antenna system to the max efficiency and it showed...you listeners and fans of KAAY can testify to the signal strength of the station!

Here's David B. heading out to the center antenna in the array, slowly, in deep thought.  David B., what was on that great mind? 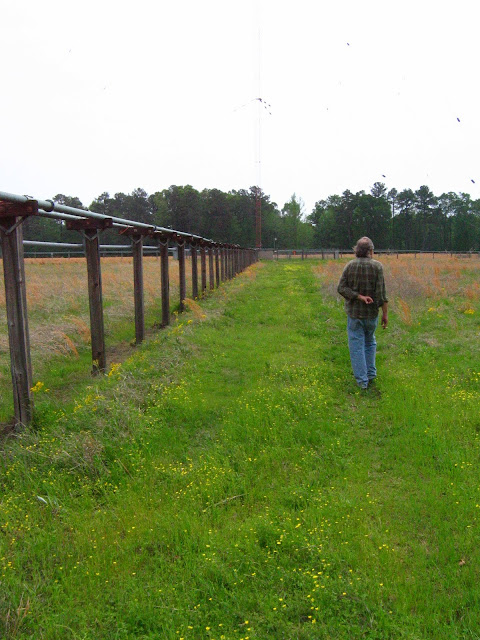 I fell a little behind as I took in the scenery...those awesome 511-foot steel structures!  I'd noticed as we walked out, the moaning going on...the wind was picking up as there was an impending storm front coming through.  At first, I thought it was humming coming from the new transmission line, but I remembered that the transmitter was off-line the whole time we were there.  I realized that the wind was blasting through and around the guy wires and the towers.  It seemed like the old site was almost crying, it sounded so mournful.

Here's Jerry and David B. as we continued to head out to the center tower: 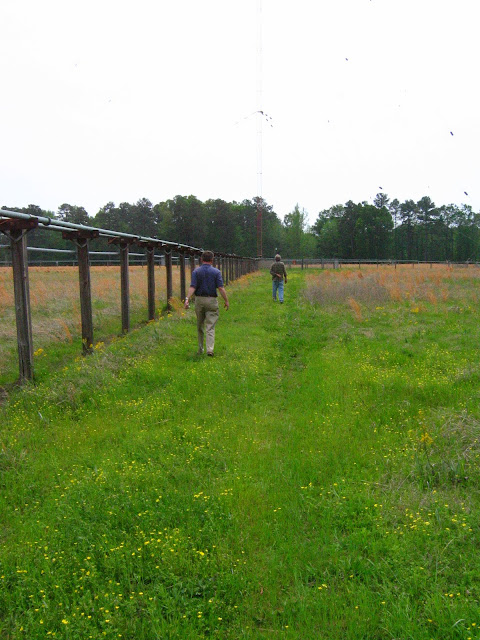 That fence-like structure to our left is the support for the antenna feedline.  Not in this picture, but the vandal had hooked a tractor to the feedline going out to the west tower, ripping it from the support.  The new feedline was already in place.  We'd all agreed that he ought to be publically whipped for desecrating this hallowed ground; we were told that he's already in jail...

This is Jerry when I caught up to him, with the east tower in the background and feedline behind him; it's hard to get a perspective, since the antenna is more than two football fields away, estimated. 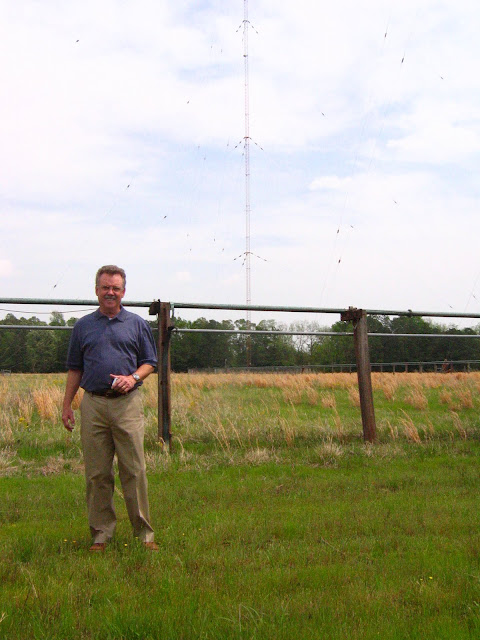 And a shot of David B. when I called to him to pose with the center antenna: 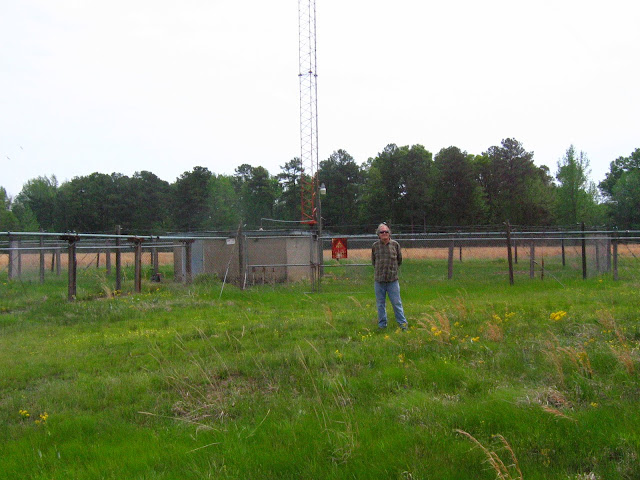 All I can say is, Felix would have a fit to see this field in this shape; he hasn't been here in a long time, and he only lives a half-mile down the road....

More later, as we continue our jaunt!