My Trip To Little Rock: Tuesday, For You Technoids

...and into the workings of that gentle giant we went.  I noticed a warning sign about fire and that if anything happened, we had to evacuate immediately, due to the halon system.  No problems, however, as the RCA was not on-line. 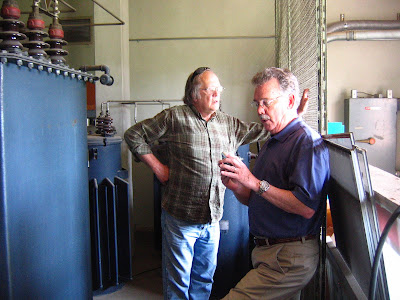 Standing next to giants, in their own rights and in my eyes, I wondered what were they thinking and feeling?  Both Jerry and David B. seemed deep in thought over being there once again.  Jerry was getting important pictures, as I was....  What was stirring in those great minds, guys?

I turned my attention, as they scurried about, to the innards of this wonderful, beautiful, magical, historical beast...and yet, a tamed beast, since it performed so wonderfully and faithfully all those years.  I started opening doors in wonderment; being a Ham radio operator, Extra Class Level, didn't prepare me for all the wonderful, marvelous circuitry I beheld.  Jerry says that this stuff interests "you technical guys", but I was in 'way over my head in wonderment: 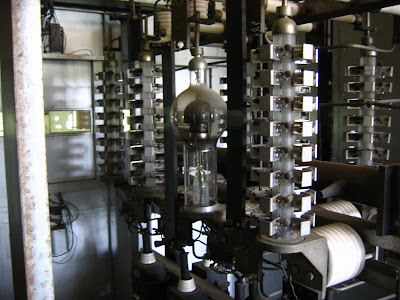 Do you recognize that half-wave rectifier tube in the center of the picture?  Yes, it's dusty, but you can see the quality of workmanship and great materials installed in this transmitter.  Felix McDonald gave Jerry one of these tubes awhile back:

Dave Montgomery told me that they had a puddle of mercury in them and glowed a "satisfying purple glow when operating at full gallop".  Many tubes still use mercury in their make-up.

Talk about POWER: this, and other transformers had to feed the RCA: 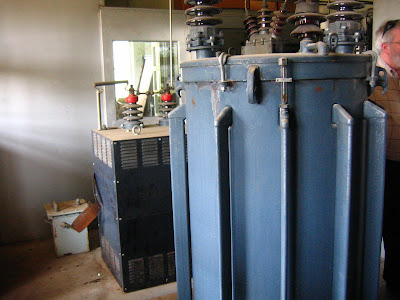 I'll bet every hair would stand up when these things were working!