FROM LITTLE ROCK TO DETROIT AND BACK AGAIN... 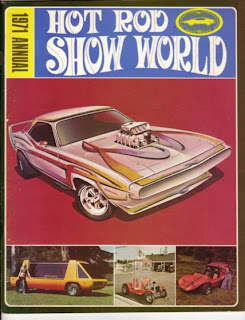 As I have mentioned before, my time at KAAY was one of the most fantastic, pleasant, and professionally rewarding experiences that I've EVER had in my career.

As the year 1971 began and progressed, I was thankful for some of the sweetest & nicest girls that had shared time with me:  Kerry, Barbara, Peggy, Judy, Debby, Katy, Doris, Linda, Cookie, plus a few others...all just great.

Also, as KAAY's "Ultimate Car Guy", I did most of the remotes that involved Detroit Iron, and so it was that the "Funmobile" & myself were at the Barton Collesium on Friday, January 22 & Saturday, January 23, for the 1971 Annual Hot Rod Show World Rod & Custom Show.

(By way of explanation:  In the R&C Industry the Winter Shows (Jan.-Mar.) are held indoors; from April - Sept. the shows are outdoors.)

In any event, this show was just SUPER !   And the featured cars were the Sonic Cuda, the Bugs Buggy, the Red Baron, the award-winning Fire Truck, and many others built by Chuck Miller at his Styleline Customs shop in Detroit.  Interestingly, less than two years later, I'd be moving to Detroit myself to work at WDRQ-FM.

NOW Flash Forward To 2007:   I'm attending the Induction Ceremonies at the Darryl Starbird National Rod & Custom Hall Of Fame and one of the new Inductees is CHUCK MILLER !  During an Interview I'm doing with Chuck, he starts going over many of his favorite cars that he's put together during the years...and the proverbial "light bulb" goes on over my head !   I saw most of the cars that Chuck was talking about in Little Rock in January, 1971 !

As I'm driving back to St. Louis I KNOW that, somewhere in the vast Archives Of The
King, I still have that magazine I was given at the time to use the info for at the Remote. It has Features on ALL of the cars we talked about, Chuck's Bio, and many other interesting notes on him. (That's it at the top of this page !)

Sure enough, I dig it out, call Chuck, and we're both amazed at the fact that 36 years after I saw his expert craftsmanship in person, that we've finally met & done an Interview together !

A few months later we got together at the yearly KKOA Lead Sled in Salina, KS., I did an update Interview with Chuck and brought the above pictured mag. for him to sign...Great Memories for him AND me !  (Since that time, Chuck, his new bride, Candi, and myself have become good friends, visit at shows a couple of times a year, update his newest info, and I have a standing Invitation to come to the Detroit Autorama that Chuck works with every year, and visit anytime.)

From Little Rock to Detroit and back again...AND how great that return trip was !

God bless all of my KAAY friends, and if any of the above named girls read this, please drop me an eMail.  One of you left your sunglasses in my glove compartment !  I've saved 'em, and if you can identify 'em you can certainly come and get 'em.

PS:   To Hear Chuck's Interview That I Mentioned Above, Just Click-On This Link:
http://www.legends.thewwbc.net/gpage42.html
Posted by   at 10:29 AM