Well, it was about time to meet David B. Treadway and his son Matt, on the way to the transmiiter down in Wrightsville!  Jerry and I kept contact with him and Jerry stopped for gasoline on "the old highway" (must have been the road, before I-530), while I ran across the road to the Dollar General for more batteries for the camcorder.  Upon exiting the store, I heard a thunderous voice: "BUD!"  When I puilled my hair back in place, I looked and there was David B. and Matt!  I wanted to run over to his truck, but I didn't want to seem overly anxious- you know how celebrities are, they get skittish with exited fans- so I quickly sauntered over and got one of the warmest greetings I'd had in a long, long time!  David treated me like I was his best friend and I was immediately at ease.

In the meantime, Jerry joined us in the parking lot; as Jerry had only been to the transmitter site once before, he told David B. he'd follow, so I jumped in Jerry's vehicle and we took off.  Now, David B. said that many years ago, he'd drive until he saw the towers line up, then he'd take the first right.  No go on this tactic, since the trees had aged along with us all, so he began going down road after scary road (you had to be there) until we got the right one (about the fourth one- NOW we know!).  Very shortly. the transmitter building hove into site and I had to catch my breath- we were finally "THERE"!  I think I sucked all the air out of Jerry's vehicle....

When we arrived, we were greeted by Gordon Stephan, who opened up for us.  I didn't know if I should laugh, cry, run around whoopin' and hollerin' or kneel and pray, I had so many emotions stirring inside of me!  There was already a technician there, working on the transmitter.  It had gone down ("lost its finals") before we got there.  Later, there was nothing to be done except order parts, so the tech tried to fire up a 5 kilowatt Harris, but no go, either; he finally had to go back to the studio for an AM Optimod, I think he told us.

I'd jumped out of the auto and tried to use the videocam (I'd never used this particular one before), but it was in "set-up" mode, so I ditched it and grabbed the camera.  I later got a video, when I figured it out.  Nonetheless, it was time to enter the mythical building....

...and, holy smokums, what a mess.  Felix McDonald would have a whole litter of cats, the place was in a shambles and dirty...

We made our way upstairs and I immediatly teared up; thank goodness for a self-focusing digital camera, I wouldn't have made very good pictures.  You'll see why, just take a look at two gentle giants being reunited after all these years: 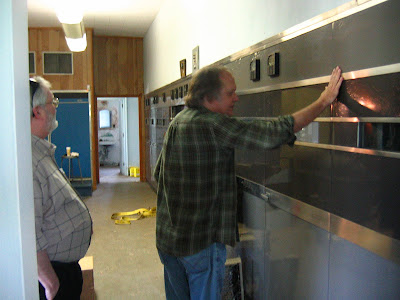 David B. gently carressed the face of the RCA as Gordon looks on... 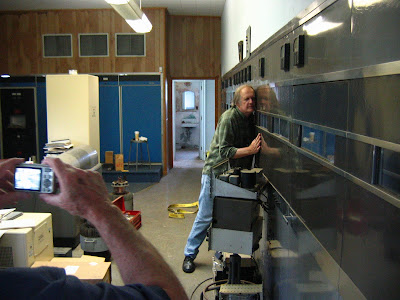 ...and David B. listening to the soul of the transmitter as Jerry and I take another picture....

If this doesn't get to you, nothing will.

As you can see in the background, there's the current transistorized transmitter in blue, only taking up part of the far wall; the RCA commands the whole wall it is installed in.  Heck it IS the wall!  "Bigger 'n six Cadillacs", Dave Montgomery once said.

Yes, this area was cluttered and dirty, as well; heart-breaking, really.  I snapped a few more pictures from different angles, one through the glass into the transmitter: 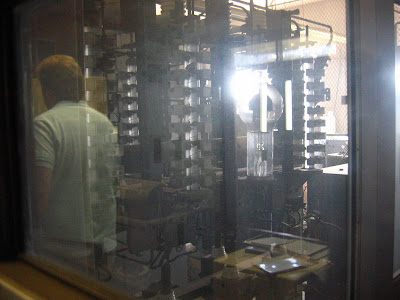 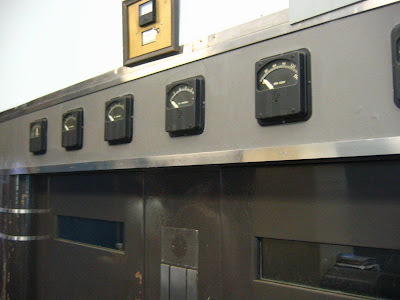 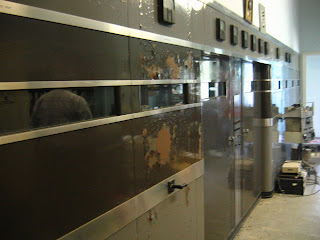 Yes, the paint is peeling, but the surface still shines, as if the RCA still has pride in itself and its accomplishments.  This unit deserves to live in a museum, where its story can be told.

Jerry and I attempted to take a few items off this control board (not a main console, I was told) to take a picture; it was in the center of the room, directly in front of the transmitter: 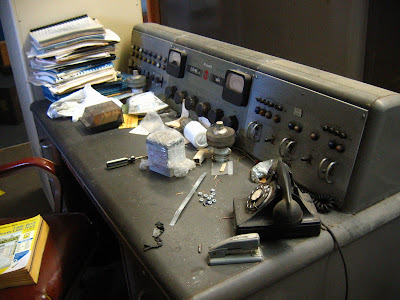 (I have a telephone just like that at home! Bud)

At this point, they told me that we could actually go INTO the transmitter, so we caught up to them....