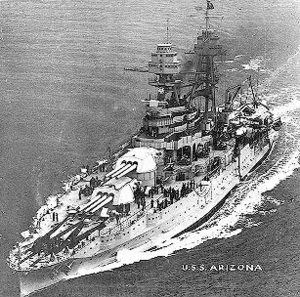 My former father-in-law, William F. "Bill" Bryant was on the U.S.S. Arizona the day before Pearl Harbor was attacked.  He was taken ashore to the hospital because of appendicitis.  The next day, while he was recovering from surgery, he watched the carnage from within the hospital, wondering if the building he was in would also be hit.

My former mother-in-law, Iva Loy "Dude" Pike, heard of this attack, as many people did, on the radio.  She travelled from north Alabama by train to California, then by boat, to marry Bill in the hospital.  She vowed that they'd never be separated before they were married and she made that stick!  They spent many a year together, until Bill passed away from emphasema brought on by asbestos (from working in the Mobile Shipyard) and smoking cigars.  I lost contact with "Dude" shortly after I remarried.  They were very fine people.

There are not very many Arizona survivors left today, so if you know of one, please be sure to thank them on December 7th- or as soon as you can.

Thank you, Bill, wherever you are; you always made me feel more than welcome in your home and I appreciate what you've done, both for me and our country.... 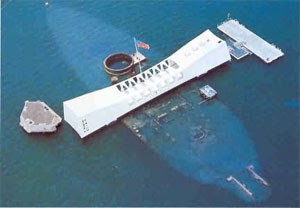