I'd mentioned John/Jack to Tom Perryman, since Tom had worked at WAKY and was affiliated with KAAY by doing announcements (see earlier posts, type "Tom Perry" in the search box at the upper left).

When Jack was at KAAY in 1962/'63, he was "John K. Anderson" a lead newsman working in tandem with George J. Jennings, but when he was at WAKY, he was deejay "Jack Grady".  Tom said this was to separate him from the news and music sides.  Tom also mentioned that Jack was somewhat of a private person, so I hope he won't mind us posting this material here, since it is already on the web.  As "John K. Anderson", he was instrumental in involving KAAY's broadcasting material for the U. S. governement during the Cuban Missile Crisis.

Here are some materials from A.J.'s old blog (a Silver Dollar Survey) and from a WAKY website: 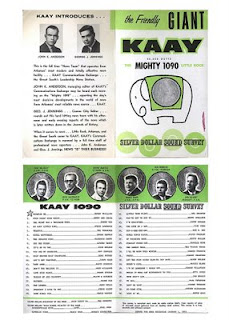 And the WAKY article (can't seem to "rip" the picture):

I just made the connection a couple of days ago, myself...where have I been?

I'm presuming that Jack worked at WAKY before coming to KAAY, since Bob Watson (Thomas S. Watson) mentioned that Jack was one of the original WAKY deejays, but no dates were mentioned in his article, "The WAKY Wonderful Days of Radio" at the link above, except for 1961.  Bob mentioned that he worked opposite of Jack at the time.

Anyone got any exact dates when Jack Grady worked at WAKY?