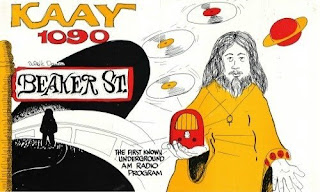 I ran across this when conducting research on KAAY. There are at least two versions of this poster promoting Beaker Street. The other has a red border/background. Notice that the poster proclaims it is "The First Underground AM Radio Program." I was never able to verify that claim, but Beaker Street was at least one of the first underground programs on AM radio, particularly in the Midwest United States. But readers of this blog know that the program had a vast audience, over an incredible amount of geographical area. According to Clyde Clifford, some soldiers spoke of picking up the program (although it faded in and out) while on duty in South Vietnam. It was not unusual for KAAY management to received QSL cards and letters from The Panama Canal, Cuba, and even England. Over 44 states and 15 foreign countries confirmed the reception of the station during the nighttime hours.
Richard Robinson (rickradio@charter.net)
Posted by   at 7:56 PM