Here’s a bit about Marti units and a couple of pictures for you. 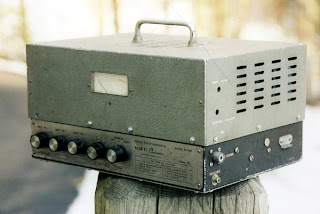 First is a picture of a late 60’s to mid-to-late 70’s Marti RPU. This is the vintage used at KAAY during that time, and at most every other station as well. In the case of news reporting, this unit would be mounted somewhere in the vehicle (usually the trunk) and a smaller remote control box (sorry, couldn’t find a pic of one of those) would be mounted under the dash with mic inputs and on-off controls.

Believe it or don’t, news was not the main use of these. Most stations put these to work for full remotes, as in do your whole show on location using one of these. If memory serves, one of this vintage was installed in the now-famous KAAY Funmobile (fondly referred to by some of us as “that frigging camper”). The antenna, which hasn’t changed much since that time, was mounted on a tall mast: 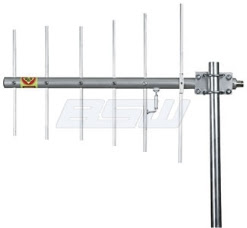 These units were highly directional, so you needed a direct shot back to the receiving dish at the studio, devoid of buildings, trees, small furry animals or whatever else. In fact, getting a “Marti shot” from any given location was iffy to the point that usually an engineer went out several days before the remote to verify a shot was possible. If not, then we had to order Telco loops.

Once you overlooked the fact that these RPU’s were about two feet long, a foot and a half wide, a foot or so deep and weighed about 40 pounds, you could call them portable. Some clients wanted the remote done from inside their store instead of from a remote vehicle, which meant you had to lug this monster in, set it up, then look closely at the floor and pick up any body parts that fell off of you while you were carrying it. They did, however, give you excellent audio quality.

These were also transmit only units with no provision for the studio to talk back to the remote. Most stations had some sort of system, like the one AJ and I had at KCLA, where once the Marti was powered up and transmitting, an indicator light in the control room would go on, letting you know to monitor what the jock at the remote was saying to you in cue. You then communicated with the remote jock by cutting the music on the air for a fraction of a second. The remote jock would say something like; “If you’re receiving me and it sounds good, give me one cut, if not, give me two cuts and I’ll go twist the antenna.”

These little transmitters also had call letters assigned by the FCC, and when you first powered it on and right before you powered it off, you had to give a station ID of the Marti. Not on air over the main transmitter, just over the Marti. 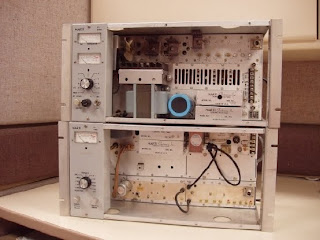 The other picture is a pair of early-to-late 70’s Marti STL’s. In fact, these are the exact model we used at KLAZ. They were low power, about 10 watts, reliable, and delivered incredible audio quality for the time. They only came in mono, so for FM stereo you had to use two of them transmitting on slightly different frequencies. In the picture, you’ll notice the front covers are missing. That was pretty much the standard way these were used, because with the covers on, they had nasty habit of overheating which would trigger a thermal protection circuit and shut them down. Not good when that happened right in the middle of Stairway To Heaven. Like the RPU’s, these were also assigned call letters, and had to be identified once per 24 hour period. If memory serves, KLAZ’s STL’s were WKQ-60 and WKQ-61. Amazing...this old mind remembers that, but I couldn’t tell you what I had for dinner last night.