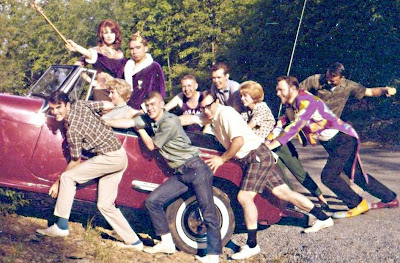 Parts I and II of this article told how Emperor Holiday came about and what promotions and materials he used to recruit and retain his army of commandos.

On his blog (May 31, 2008), A.J. stated that every one-minute episode of Emperor Holiday ended with the tag,
Join now! Become a Lieutenant in Emperor Holiday's Commandos! Send a self addressed stamped envelope to Emperor Holiday, KAAY, P.O. Box ....'

Here's Ron Henselman to tell the rest of the story:

"Since I listened to Doc at night, I wanted his membership card. (Clark Weber at WLS was on during a time period when I couldn't listen. I never got around to sending for an Emperor Weber card even though I liked Clark Weber. I heard Emperor Weber first; then I heard Doc.)

I sent a SASE to KAAY to receive the membership card, which was promoted all day long on KAAY. I got one and I carried it in my wallet for a year or two; then I decided it was getting ruined from being carried. I put it in a small leather box with other radio station goodies. That box remained in the same drawer for many years. My parents left most of my things as they were after I got married. I searched the Internet for years about certain things. I searched for things about singer Janie Grant and also KAAY. There just wasn't much to be found about KAAY; then one day I found Doc's blog. After writing to him, I was surprised he never kept an Emperor Holiday's Commandos card. I sent him mine to scan because my scanner was broken."

Ron kept the emails he exchanged with A.J.:

Ron to A.J., Jan '07:
While I was looking for audio tapes, I decided to look into a little box which contained items I considered important. I knew there was an item I kept as a KAAY souvenir: my Emperor Holiday membership card. It even has a serial number on it. It is 032103. If the cards were issued in sequence, that means there were at least 32,000 of them sent out. Wow! 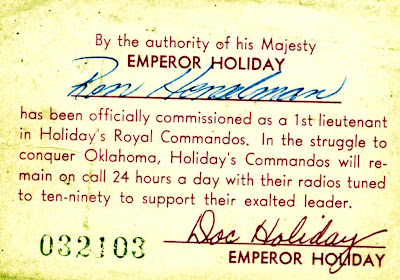 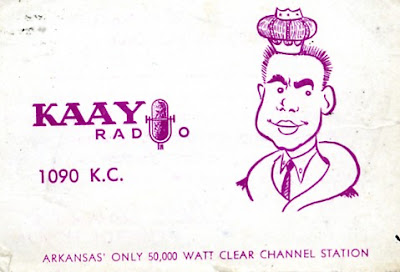 Do you remember the plan? Once Oklahoma was conquered, the oil wells (towers) would be converted to Christmas trees, so it would be Christmas all year long. I can imagine them with all the Christmas lights strung-up on them.

A.J. replied to Ron:
The card really brings back memories. Also, your remembering what we were going to do in Oklahoma. Just shows how emperors lose sight of their goals :) .
When Mark Century stopped producing the comedy bits, we tried to do some locally. The personal appearances of The Emperor and the basketball team took over as our main emphasis.

A.J. also said:
Seems like we had a sequential number stamp but I have no clue as to what number we started with. That number is possible considering we asked people to send a self addressed stamped envelope. I would also like to have a recording of one of the comedy bits that promoted the membership. It was produced by Mark Century and had the characters of Col. Splended, Daphnie, Lt. Cavandish. I don't have a single recording and there were hundreds of episodes.

That is not my signature on the card --- The station took the time to fill out the name line on each membership card! Most stations wouldn't have gone through the effort or expense to have someone write out a card for each member, but KAAY did.

A.J. sent me the scanned image back, and I got the idea to restore the card and offer it again. A.J. liked that idea, so I went to work with Photoshop to fix the edges, remove dirt marks, and remove my name. I worked on it for about six hours. Some efforts go unappreciated, but not this one: 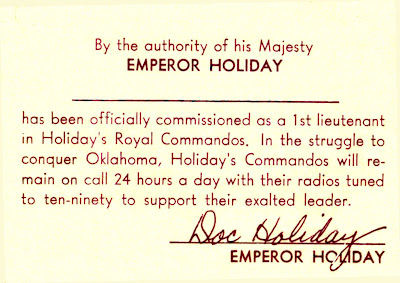 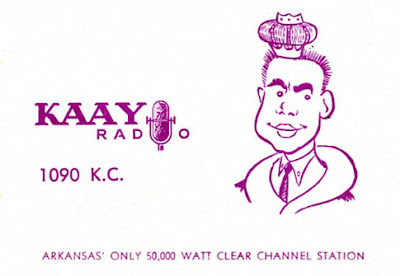 A.J. to Ron, Jan. 14, 2007:
Thanks so very much! Great job! I just don't have the patience it takes to do restoration work. Now I will take those images and try to put them in a program that will print them in a business card format so that I can print several up at a time.

Just think --- you are responsible for returning the Emperor to power!

Thanks again,
AJ
P.S. I'll make you a Lt. Col. in the Commandos

Many thanks to Ron from Chicago for sending me his Commando membership card so I can include it in the blog. I have not had a copy or seen one for about 40 years. I had completely forgotten that our goal was to conquer Oklahoma. Another item of interest, that is not my signature. I remember at the time, using someone else to sign so it would be legible. I have justly rewarded Ron with a few Emperor Holiday million bucks. Note Ron, these are original and not repoductions.

When A.J. sent back my Emperor Holiday Card, he also included some KAAY money. My wife cleaned up, so I am not sure where the envelope went. [!!!]

A.J. told me I was being promoted to the only colonel ever in Emperor Holiday's Commandos for restoring my membership card, so he could start sending them out again. I spent hours restoring my beat-up card and removing my name from it. I'm not sure how many he printed and sent out during the last couple of years, but I was proud of the fact he enjoyed my efforts.

Ron also told A.J. about how he first became a KAAY listener:

Ron to A.J., Nov, 29, 2008:
Dear A. J.,
I told you I was a longtime listener to 1090 KC., but I never told you how it all started. I talked my parents into buying me a little tube type portable radio. It was 1957, and I was ten years old. One night I was up late, and I heard KTHS. This seemed quite amazing to me, so I decided to leave the radio dial tuned to 1090 KC. The next day I brought the radio down by Gary Wegner (KAAY "Dixie" signoff) to show him how my radio would pick-up a station as far away as Little Rock, Arkansas. When I turned the radio on for Gary to behold my discovery, there was nothing but a little bit of hissing noise coming out of the speaker. We were both disappointed. That night my father explained about the ionosphere and skywave only occurring around the hours of darkness on the AM radio band.

In his comments to me, Ron finished with these remarks:

I enjoyed relating to A.J. my listening experiences, but I enjoyed supplying my skywave air-checks even more. Many of you remember KAAY as mainly Beaker Street. I was in the Army about that time. KAAY was rock and roll to me. The Mighty 1090 played good, clean rock and roll in those early days.


What a great story! Thanks, Ron, for your memories and, above all, for your kindness in helping A.J. --- Emperor Holiday --- enjoy once more a happy time in his life!